Our client came to us with the brief of creating a house with a similar feel to the award-winning German Huf Haus design.

Creeping into the UK market, these timber and glass houses are generally two-storeys high with pitched roof separated at the gable. Typical features include terraces, canopies, roof lights and large windows…we were excited to get started!

The interior is often a very open design with double-height spaces, galleries, high ceilings, open dining, living and kitchen rooms, and connected yet private bedrooms. The design aims to maximise the sunlight and bring the natural world directly into the living space.

Big open spaces and the natural light appealed to our client, but they wanted to have a little more privacy and a more ‘homely’ feel than the original German design. 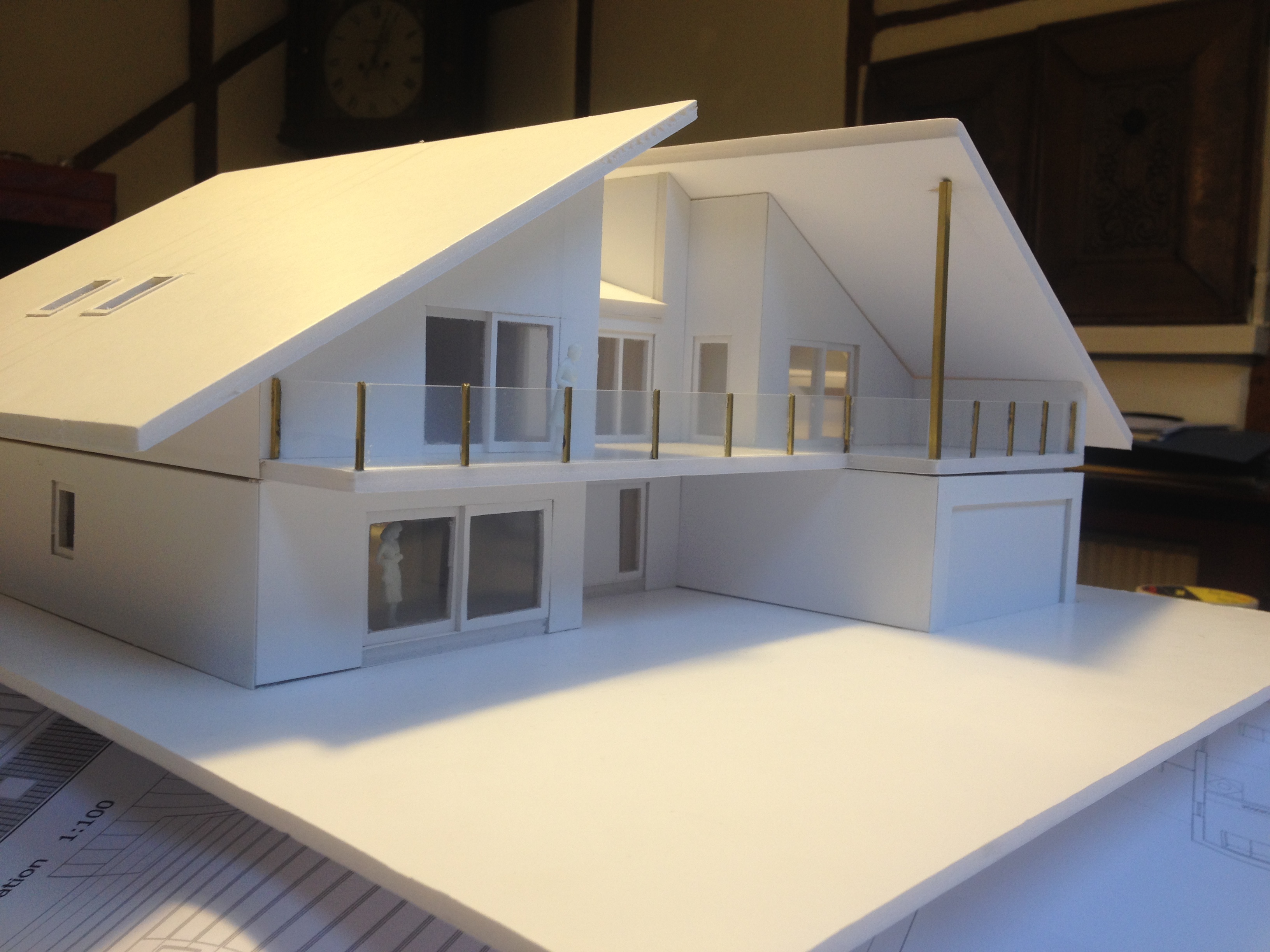 For the ground floor, we designed a bright, open living dining and kitchen space, capturing sunlight from the top of the roof and big sliding windows and connecting to a glazed dining area..

The bedrooms were placed in the first floor with en-suites and connections to a large terrace.

We decided to use a innovative construction for our new building, settling on Structural Insulated Panels (SIP) from Kingspan TEK. These fit into the Huf House feel as were made of wood and had an invisible structure which allowed interior design freedom. They are also prefabricated which shortens construction time on site meaning that there is minimal on-site waste and internal work can begin earlier. The panels have a thinner construction than usual insulation and high energy efficiency.

To incorporate the look of an English house while maintaining the dark-light contrast feature of a typical Huf Haus, we supplemented a brick wall on the outside ground floor and white walls above.

Later living housing and building homes for the ageing is something that resonates strongly with our values and efforts, and we were interested to learn about other architects ideas in this area, and
the latest developments taking place.

We enjoyed an inspirational day exploring the themes of inclusive design and holistic communities, as well as the financial costs of later living care, both in the building itself and then making sure these spaces are sustained over time.

So what are the problems associated with later living housing and why is this something we should be concerned about? Why, as keynote speaker Paula Broadbent, Retirement Director at Keepmoat suggested, are 600,000 older people currently residing in poor-quality homes?

Homes that are inappropriate for later living can include those that:

Despite the phrase ‘planning ahead’ being voiced time and time again throughout of our daily lives, the reality is that we rarely have the time or inclination to take the notion seriou

sly- and take immediate action. Keynote Speaker Tony Watt OBE, Chairman if the Southwest Forum on Ageing, explained how important it is to make a change before it is too late and we have reached a ‘point of crisis’. He highlighted that older people are often very conscious of how they will be perceived if they downsize from their current property for which they have worked hard for, and that this is one of the key barriers involved in this preparation for later life.

From our experience, we have also realised that there is too much focus on housing as a capital resource, and that this leads to people staying in their homes for longer. This can be problematic, as these houses can often be too large and are not always appropriate for later life.

Downsizing at an earlier stage can mean that people are more likely to better negotiate a more flexible property, ensuring they find a mutually supportive and evolving community.

So why isn’t this downsizing progression occurring more frequently? Here we face a major problem- throughout urban and rural areas, a lack of enticing and affordable property deter people from making this significant step and change to their lives. Furthermore, the lack of variety of tenure required to suit the spectrum

of ambitions makes this move a risky feet and for many, not worth the costs involved. If the issues are addressed- and sooner rather than later- a platform for a safe and fulfilling later life for all could become a reality.

However, there are some schemes which offer hope that things are moving in the right direction. Living Space Architects take later living very seriously, and understand that quality, innovation and creativity is not something that comes at the expense of making a house functional for later years. We are always keen to consult with local people, developers and care providers and use our contextual knowledge and innovative thinking to help shape the later living accommodation of the future for the better. We are taking action now.

Our beautiful house extension and refurbishment project in Grey Wings, Cornwall has been featured in the ‘Design Guide’ for Real Homes Magazine under ‘Sustainable Style’.

This was a wonderful project to be part of, and we worked with obsessive detail to make the property the best it could possibly be.

The result was a highly sustainable and innovative design, embraced the stunning views and location of the property in a contemporary, stylistic manner.

To read more about the design, and see more pictures of this impressive extension, click here. 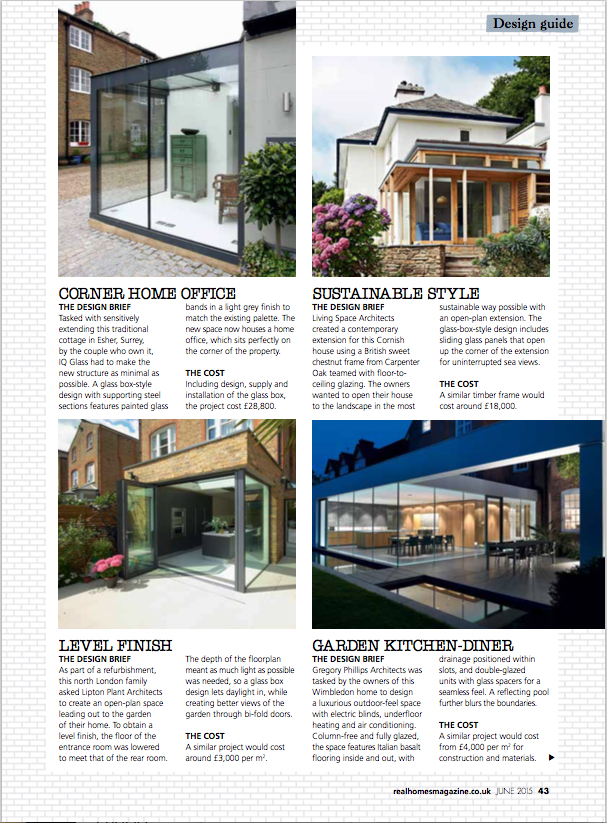